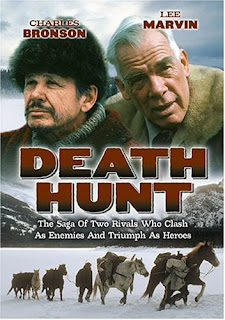 Wed. aft., snow-bound. I can think of no better tonic on this stormy day than to curl up with a superb action/chase film from the early '80s. A film that deals in equal parts comedy and drama, high adventure and romance. A film that never takes itself too seriously, but doesn't shy away from scenes of hard-hitting, and often disarmingly true, dialogue. And most importantly, a movie that takes place in the snowy wilds of the Yukon territory (aka Canmore and Drumheller, Alberta) in 1931. The movie is Death Hunt.

Apparently based on a true story, the plot concerns aging and world-weary RCMP man Sgt. Edgar Millen (Marvin) who is more content with playing poker, smoking cheap cigars and drinking whisky than he is with upholding the law. This is still the frontier after all, and Millen is content to let the law take care of itself. That is until upstart recruit Constable Alvin Adams (Andrew Stevens) reports for duty, upsetting the old ways. Millen and his friend (fellow officer? This is never made clear), the bizarrely monikered but totally awesome Sundog/George Washington Lincoln Brown (Weathers) are pestered by local dog-fighter and general ne'er-do-well Hazel (ubiquitous character actor Lauter) to take down the famous Mad Trapper, Albert Johnson (Bronson) for "stealing" one of his fighting dogs (read: humiliating him in front of his peers). Millen leaves well-enough alone, as per usual, and Hazel and his group of cronies head up to Johnson's cabin to mete out their own terrible brand of justice. But of course, things go awry, one of Hazel's men is killed, and this is finally the impetus for Millen to spring into action. And the chase begins....

Bronson and Marvin are superb in their respective roles, and while this is generally an ignored work in Marvin's ouevre (having the misfortune of falling between Sam Fuller's 1980 war film The Big Red One and Michael Apted's Gorky Park in 1983), he really comes alive in the role, and seems to be having a lot of fun here as a man who is torn between being forced to uphold the law and the "new ways" - the fast approaching future where men of his ilk are left to grow old and die alone - and sticking to his own moral code, his begrudging respect and admiration for men like Johnson, men with the bark still on. Bronson has less material to work with, and outside of a few intense scenes, he ends up having more dialogue with a convalescing fighting dog than he does with any human character. Which I guess is partially the point - a man like Johnson is more at home in the natural world than he is with any man.

Call it a stretch if you will, but the chase here, and Johnson's flight, seems to be very much an attempt to escape from the encroaching world of man, the new world filled with gadgets and technology that simultaneously and paradoxically present a near infinite amount of possibility for connection while driving a wedge between a man and his spirit. It is no small matter that the new deputy, Alvin Adams is trained in "communications"; ironically, he seems to know far less about really "communicating", and is more inclined to shoot first, ask questions later, than the old-timer Millen.

There are scenes throughout the movie that show the advancement of technology and it's permeation of the small town, from the introduction of a radio to the appearance of an RCAF pilot who wants to take down Johnson and usurp Millen's power at the same time. Symbolically, the plane and its pilot meet a fiery end by crashing into a cliff, and the radio is shown in close-up and bullet-riddled after a shoot-out. There are also a few great scenes of dialogue where Millen makes it very clear that he doesn't like what he sees coming, even if he knows he is powerless to stop it.

Policewoman herself, Angie Dickinson, appears in a bizarre role that is completely incongruous to the goings-on, and reeks of studio tampering demanding a romantic subplot - too bad really, as she is a great actress, and deserves better. Her appearance only seems to distract from and bog down what could have been a much more streamlined tale. Look for William Sanderson, getting comfortable on the frontier as a warm-up for his role 25 years later in Deadwood, and a deadpan comic duo of Canadians (by birth or adoption) August Schellenberg and Maury Chaykin.

If you want to see two of Hollywood's baddest bad-asses face off, here it is. It's Into the Wild without the self-righteous preachy philosophizing of a deluded 23-year old. Oh, and with guns. Recommended.

Posted by the coelacanth at 2:57 PM

If you are snowbound, I hope you are making me dinner. Nice review, little Joe.

I've got no problem with the idea of communicating with a weapon. It's the only way most people will listen.

depends on what kind of weapon you're talking about...usually i just get tears or stone cold silence....but i guess that's the clearest form of communication.
thanks for the kind remarks,
-joe