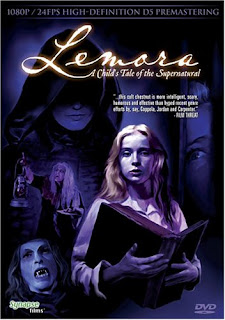 I just finished watching this for the second time and thoroughly enjoyed it. The plot centres around young Lila Lee (the wonderful and tragic Cheryl "Rainbeaux" Smith) and her journey from small town choir girl innocence to find her supposedly dying father among a nest of witches, vampirism, boogeymen and bad vibes. The entire film has a nightmarish quality to it and it displays both thematically and stylistically (rare) the horror and awkwardness of pubescence or "the supernatural". There are also harsh critiques of the church throughout, some not-so-subtle.

The score is very effective, mixing gospel hymns (sung by Lila Lee) and weird, pulsing synth rhythms to create a haunting and paranoid aural tapestry. Lemora herself is very creepy, but the way she delivers her lines is immensely horrible - I'm talking porn movie bad. If they had have overdubbed her, or had a different actress in the role, I think the film would have benefited greatly, and become much eerier. In fact, the most frightening character was an old hag who cares for/menaces Lile Lee while keeping her captive in an old stone hut. The scene where the crone sings to Lila Lee in the shed is truly chilling and gives me shivers whenever i think about it.

The makeup effects were good (if somewhat basic), and there are a few "shock" moments (one in particular where Lila Lee thinks she is calling to her father in her room at Lemora's house and he comes out from behind the clock completely transformed into one of the "wood-things" - you'll understand when you see it - with a simultaneous jolting soundtrack) that actually made me jump (a tiny bit).

My overall impression of the film is that it is the bastard spawn of the Wizard of Oz and Valerie and Her Week of Wonders, with more than a dash of the supernatural (hence, the title) thrown in, and if you enjoyed either of these, you'll probably like this. I also have to wonder whether Dario Argento was influenced at all by this film when he made his masterpiece, Suspiria, four years later; or perhaps even Guillermo del Toro took a few cues from this for his justly celebrated Pan's Labyrinth, 33 years later....

Cheryl Smith's own story is similarly haunted - the star of many B-movies of the 70's, she soon fell under the spell of heroin (while performing in The Runaways!?) and contracted a fatal case of Hep-C. Harsh tokes.

Lemora: A Child's Tale of the Supernatural still stands as a testament to her talent, though. This is a fever dream of nightmarish, surreal imagery, a piece of cinematic brilliance that will haunt you for days. The Synapse DVD has an excellent remastered anamorphic widescreen transfer and does the film's dark tones and jarring soundtrack justice. Highly recommended.
Posted by the coelacanth at 11:00 PM

I've got to see this. Children, even the least offensive of their kind, are creepy and not to be trusted. Oh, they may look all cute and doughy on the surface, but I've seen their little demonic eyes glowing and heard the shrill bird-like chirp language they use to communicate their evil intent with one another. They may be screaming "I WANT CRUNCHY FROG!!!, GIVE ME CRUNCHY FROG!!!!", but what they are really saying is "I want to kill you and eat your still-beating heart".

"Now dear, stop eating the bad video man's still-beating heart. We'll get you a cookie at Cherry Bomb, one at the Queen of Tarts and have another "you-party" when we get home."