Think about it: BATMAN. VERSUS. DRACULA. It doesn't get any better than this. Well of course it does!

Now, let me begin by saying that I'm pretty sure no one (except maybe Kris) is going to watch this, but that still doesn't change that fact that I was quite taken with the animated Batman feature Batman vs. Dracula, and would wholeheartedly recommend it to anyone on here, child or adult. The "film" is certainly neither profound or thought-provoking, but it is incredibly entertaining and retains a wonderfully fast pace throughout its economical 75 minute run-time. Yes, it is ostensibly a "kids" movie, but no more so than Batman Forever/Batman and Robin. If you subjected yourself to those atrocities, you at least owe it to yourself to check this out. A very cool take on the Joker, a darker version of the Penguin than the cartoons usually show, and above all, the Dark Knight versus the Prince of Darkness, a match-up that was bound to happen sooner or later. Virtuoso animation that would make Frank Miller proud, a surprisingly atmospheric score, and some very interesting and often frightening (given the target audience) interpretations of both Batman, Joker and Dracula. Recommended for the open-minded who won't scoff at "children's fare". Fits together quite well with last year's shamefully overlooked Batman: Gotham Knight. Really, how can you not love a cartoon that references both The Shining and Jerry Maguire? BOOM goes the dynamite! 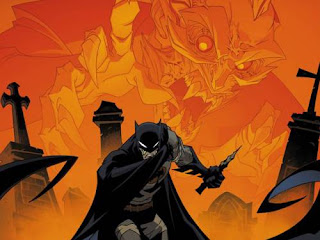 We wait three weeks for a peep out of our illustrious blog leader, and this is what we get?

i like to keep people guessing...
can't let things get stagnant.

it finally reviews Batman vs. Dracula!

Joe has been talking about this movie for ages.

i was just trying to articulate all the thoughts swimming in my head about this incredible masterpiece.

Thanks for sharing such a great blog..Keep posting..Very informative post. The Batman (2021)