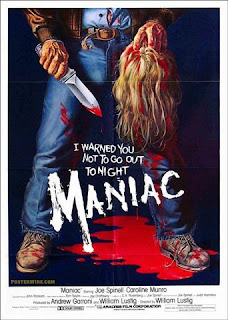 Pretty obscure by mainstream standards, this sleaze-fest is revered in cult and horror circles as the missing link between Psycho and Silence of the Lambs. Wallowing in a festering, greasy, apartment, Frank Zito (the zany and totally awesome Joe Spinell) stalks and kills prostitutes (actually, pretty much any woman) and scalps them, collecting the cadavers' hairpieces and wardrobes in order to dress up a gaggle of female mannequins he keeps at home and converses with, fondles and lovingly caresses. Amidst accusations of misogyny, the film was picketed by women's groups upon it's release into the grindhouse cinemas of New York's 42nd St. ("The Deuce"). While understandable, Maniac is nothing more than an exploitation film that actually does what it sets out to do - which doesn't make it wrong or right, but certainly makes it effective. It is a wickedly twisted glimpse into the marginalized mind with some great atmosphere and rad gore effects from fx-wiz Tom Savini (who also shows up in what is the movie's most talked about death scene - has to be seen to be believed). Caroline Munro (highlighted in two consecutive posts now? Unintentional, I swear....) is stunning in a rather strange role.

Maniac is an all-out creep fest that really redefines the concept of "momma's boy". The film oozes a gritty, scuzzy pre-Giuliani New York vibe, and has a documentary-like feel, lending authenticity to the goings on. Spinell was honestly astonished and saddened at the backlash the film received and his attempt to shake the bad rap, 1989's Maniac 2: Mr. Robbie (in which he played a TV host by day and an avenger of abused children by night), was cut short by his untimely and heartbreaking death.

Currently not at either Film Buff location, it is definitely worth seeking out (or ask me - I own it). Uncomfortable, but essential, viewing.

Posted by the coelacanth at 8:00 PM