Kris doesn't have access to a computer today, so his review will be delayed a bit, and I will add it here when it comes through.  For the time being, here's my take on Jim Mickle's Stake Land.
---------------------------------------------------------------
So, this year's version of Midnight Madness is winding down, but one of the films that I'd been most looking forward to was screened last night, and lo and behold, did it ever deliver.  Jim Mickle's Stake Land shows us an America perhaps in the not-too-distant future wherein vampires have begun to dominate, and society has essentially been splintered into small bands of survivors, with two clear cut camps: religious fundamentalists and the sane.  In these days of Tea Party hysteria, this is all too uncomfortably familiar.  More a road movie than a vamp flick, Stake Land reveals that, in an age of fanaticism and intolerance, vampires are the least of our worries.

The story has a man ("Mister") and a boy ("Martin")joining forces in order to get to a safe haven in the north known as New Eden.  However, it is unclear if this refuge will even provide solace, as the boy is warned by a store clerk that they'll need to watch out for the cannibals one they arrive there.  Along the way, Mister and Martin pick up a ragtag band of survivors, whose only link is that they share a respect for human life regardless of race or creed.

All of the actors, to a person, do a fantastic job of creating realistic characterizations out of what could very easily have been caricatures.  Kelly McGillis' nun, "Sister", is particularly affecting, for even though she wears the cloth, she is not so lost in fundamentalist beliefs or irrationality to realize survival trumps all when belief and urgent pragmatism clash.  Nick Damici, who wrote the script for Stake Land (as well as Mickle's previous film, the wonderfully grimy and similarly humane Mulberry Street), plays Mister, a brooding antihero who softens over the course of the film, and becomes more and more compassionate, learning that looking out for number one may keep you alive, but it will ultimately have the more damaging effect of total alienation.  Martin doesn't have much to say, but provides the voice-over narration that nudges the story along at an easy pace.  Sean Nelson, Bonnie Dennison, Danielle Harris, and especially Michael Cerveris as Jebedia Loven, the personification of the idea of Christian Fundamentalism taken to a terrifying extreme, all contribute solid work in slightly smaller roles.

The pacing of the film needs mention, as it is neither fast nor slow, but sort of flows like a languid river, free and easy, never slowing or hastening, and always staying the course.  The whole thing felt very natural, very real, and even tangents in the plot acted more like swirling eddies rather than highway off-ramps, deviating for a brief moment of pause before once more giving in to the pull of the water.  In fact the whole film has a very naturalistic feel.  Kris mentioned before the film that he had been speaking with one of the MM programmers and was told that Stake Land was like if Terrence Malick had shot a vampire film.  That idea stuck in my mind as I watched the film, and it is not a poor description at all.  Shades of Malick, David Gordon Green's earlier work, Lance Hammer's Ballast, and, to come full-circle, fellow Glass Eye Pix alum Kelly Reichardt's disarmingly real films.  In particular, I saw similarities between Stake Land's characters and the small, touching and very human interactions in Reichardt's Wendy and Lucy.  Pretty deep stuff for just another "vampire" movie.

But that's just the thing - much like Glass Eye Pix founder, Stake Land producer, and renaissance man extraordinaire Larry Fessenden's own Habit, Stake Land is really a vampire film in name only, using the vampires as a vehicle to deliver a more important message, a message that perhaps would be criticized as being ham-fisted if it had been wedged into a traditional drama.  However, that is an area where horror excels - because of the suspension of disbelief necessary to enjoying the films, an urgent message can be the driving force of a film and not come across forced.

The camera work is stunning in Stake Land, and for every gory money shot, Ryan Samul's camera lingers over wintry landscapes, reeds, rushes, trees, streams.  There is a very familiar sense to these landscapes, the purple and blue hills of the Catskills and beyond, not only because I've traveled through them, but because the frosty woods and icy brooks mirror our very own landscape.  This familiarization of the setting helps to drive the message home, but I don't think it would isolate viewers from a different geographical region, though it might make the film a slightly less personal experience.

Jeff Grace contributes a compelling score that draws as much from symphonic work as it does from early Americana and Smithsonian Folkways recordings.  Mickle spoke of how the score moved backward in time, almost as if the characters were heading back into pioneer days, evoking old ghosts and decaying dreams.  In fact, the film felt very much like we were witnessing a societal de-evolution, a return to primal needs and fears, where survival is not a right, but a privilege, and the score at times reinforces this idea, and at times juxtaposes it, all to great effect.    The score acts almost like another narrative device, in the same way that the camera, the narration, and the plot all have us floating down the river at the same pace.  The way that all these elements seamlessly mesh and play off each other is nothing short of cinematic excellence, and really showcases the power and importance of the "director".

Back to Malick - Mickle mentioned in the Q&A that he was heavily influenced by Days of Heaven while shooting Stake Land, and it shows.  From the child-like voice-over narration, the score and the naturalistic cinematography - even the small group on the run - Days of Heaven is prevalent here.  Which, I suppose, is why Stake Land comes off less like its similarly themed but completely different feeling contemporaneous celluloid peers Zombieland and The Road, and more like, well, a good film, a piece of cinema rather than just a movie.  Stake Land, while having the potential to be overly sensationalistic, is expertly helmed by Mickle and the fine production touches by the Glass Eye Pix crew bring it all home.

So I must say bravo, to all involved, and to Colin Geddes for getting this film for the Midnight Madness faithful.  Stake Land is certainly an 11th hour contender for my MM top spot.  Stake Land is one more addition to the super solid Glass Eye Pix/Scareflix stable, and everyone involved has every right to be very, very proud of what we saw last night.

Also, I want to give a big thanks to Larry, ever the gentleman and awesome guy, for posing for a photo with a huge fan.  Those of you who are regular readers of this blog know my respect and admiration for the man, and I'm still a bit star-struck for having been in the presence of one of my cinematic heroes and long-time champion of powerful independent film.  And, really, that's one of the coolest things about MM - unlike the big galas at TIFF, you might find a director or actor in line next to you, waiting with the same anticipation to see something new and exciting.  And often you can simply walk up to a legendary director, put your arm around him and smile like a big, dumb kid. 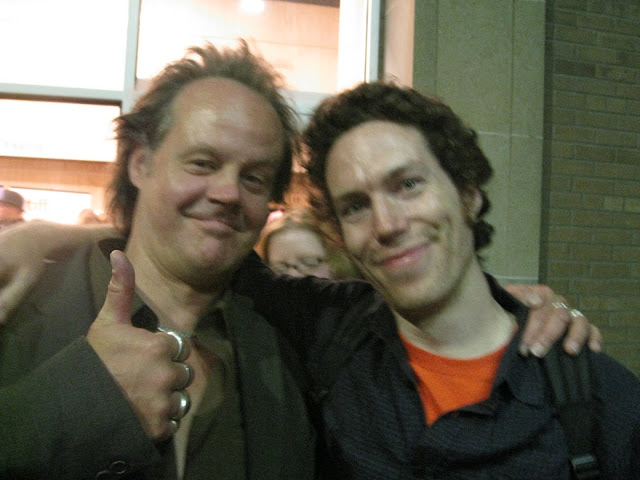 Posted by the coelacanth at 2:22 PM

Wow. A more poignant and bang on review could not be written. I'm speechless both as a reader and writer, to add anything to this would make me feel foolish. All i can really say is "ditto", if I was worthy enough to say even that. Amazing post Joe.

After sleeping on it, this is definitely my best of the fest. Gorgeous film.

thanks for the kind words gents. when i enjoy a film as much as i did stake land, writing about it is a breeze.

Wish i say it, had a ticket too. I bet it will get released.

Sounds like the MONSTERS film i just saw at TIFF. Not really like a typical Ishiro Hoda Toho Giant monster flick. Although it did have giant monsters killing millions of people the film was about two people slowly being changed but what they and we as the audience see is happening around them. The same way Let The Right One In was about childhood romance and bullying with the vampire thing off to the side. Me thinks this is a new trend in the horror genre.

thanks for the comment, jimi - i think it'll get a release for sure, being a glass eye pix production and winning the people's choice award. i hope this is a new trend in horror, i like it. i think you'll dig it alot, and i really want to see MONSTERS. how was cold fish?