...And Justice For All 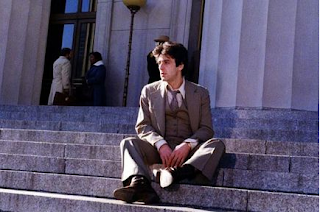 This one really impressed me; a scathing portrait of the American judicial system on all levels - a film that calls attention without any reservations to the amount of procedural rules and regulations written into ‘The Law’ that have the distinct ability to hide the truth from coming out in the court room. Not too mention corruption and politics, which come in as a no-brainer. What is more effective in this narrative is the little guys who meet their maker as a result of small technicalities. In (albeit far-fetched)succession a broken tail light, a planted knife, and a submission of evidence 3 days past the deadline lands a completely innocent man in jail. He eventually takes people hostage, etc, etc. as the melodrama quotient soars to sate Hollywood expectations, but what manages to come across is a feeling that this institution has truly evolved into something nobody can quite control or predict. An organism that feeds on people who have no one, nothing to turn to. The film is dark and gritty as many movies were in the 70’s and now are again today; but I noticed that unlike current films like No Country for Old Men, There Will Be Blood, Before the Devil Knows You're Dead, Gone Baby Gone, Rambo, The Last King of Scotland, etc. here there is a strong dose of the absurd, of people coping through going berserk, losing their heads - and not a la Girl Interrupted or some other modern view of insanity - but kind of funny and just a bit looney tunes. There are some funny moments in this movie no doubt, which does not undermine the very depressing consequences of the film, but rather buttresses them. A sense of humor is always present in broken spaces for they are intrinsic and necessary for the continued participation and well-being of all the principal players. The movie does weave a fairly over the top story and would have been a disaster had Al Pacino played the part in 1995. But even during its climax, where Pacino has a barn-burning speech that is impossible to tear your eyes from (I watched the sequence again as soon as it finished), there is a genuine sense of integrity in what Al is yelling about. He is fucked; the bad guy will win, there’s no way around it - but there is an exhilaration of standing up, blowing the whistle, calling the bluff. That’s missing right now; a script written today could not allow a shit disturber to live; if he stepped out of line amongst the heavy weights he would be not only ‘disbarred’ but shot in the head 5 times. Any thriller made now kills those people in an attempt to make big brother or the powerful seem that much more scary and potent. Heroes today must find holes in their plot, catch 22’s and other sneaky and equally as manipulated and calculated gestures as the bad dudes are making. Or at best they succeed in hard handed, stone faced action. Here, that whole situation is deemed bull shit - ‘winning’ inside an abomination is not possible.

I I hear reports of how people wait for their court dates for a year in prison these days; yet I haven’t seen a movie come out in my lifetime that calls into question the courts - and I mean seriously and rigorously; JFK is close. Runaway Jury forget it. Basically topical films that call into question national and in this age international institutions and their procedures and mechanisms are non-existent; Blood Diamond and others are worthy subjects no doubt but they are exotic and are products of greater forces. Where’s the movie about Guantanamo Bay; Pharmaceuticals; Wall Street? The best we have is Michael Moore and Al Gore? Documentaries no matter how good, do not reach as wide an audience, regardless of ‘popular trends’, as much as narrative fiction movies do. ...And Justice For All does have a Hollywood script that manipulates the viewer into buying into unrealistic situations, but the spirit of the movie, what it actually says is greater than the sum of its coincidences, is a commentary of a sacred and ritualistic societal presence; and it does so with Tragedy and Comedy.
Posted by Worsenfunk at 10:19 PM

Good Post Funk-Lad. This was one of my favourite films back in the day. I think it's a big black comedy masquerading as a message pic. I put it in the same category as M.A.S.H. and Catch 22. Right on about them not making these anymore. Too bad.

weird coincidence - some broad came into the FBE tonight and rented this, saying she had to screen clips from it for an audience of 60 at u of t tomorrow. probably the first time it's rented in 3 years...

and oh yeah - they don't make 'em like this anymore +1

fucking miami vice,
collin farrelll,
that black guy
there. holes all over the system, and cocaine. yessh