Executive producers Steven Spielberg and Tom Hanks' 10 hour miniseries The Pacific (HBO, 2010) is primarily based on the books Helmet for My Pillow by Robert Leckie and With the Old Breed by Eugene Sledge. Together with Guadalcanal Medal of Honour recipient John Basilone, Leckie and Sledge are the focus of the series. Unlike the Spielberg/Hanks 2001 miniseries Band of Brothers, which concentrated on the members of a single platoon, The Pacific traces men whose paths cross only sporadically during the war, spinning several story threads that weave in and out of the 10 episodes. It's a departure from the formula of the original series, but serves this story well. 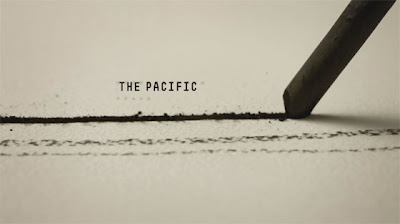 Like Band of Brothers, The Pacific is spectacularly-polished and full of moments of great technical prowess. The battle scenes are brutal, exhausting, realistic and graphic, the casting superb, and the direction mostly impeccable. The series strikes a slightly different tone than Band of Brothers, one that both separates and defines The Pacific as a stand-alone piece. The brutality and racially-charged nastiness of the Pacific campaign is particularly jarring, as is the vulnerability of the Marines we follow through the series. The Japanese soldiers are portrayed as almost alien, relentless warriors who reside in the shadows and whose ferocity and willingness to sacrifice their lives for the empire unquestioned.

There are a couple of episodes devoted to the life away from the battlefield and while they might slow the series down a little, the relentless savagery of the Guadalcanal, Cape Gloucester, Peleliu, Okinawa and Iwo Jima battles are so grueling, that these interludes come as a bit of a relief if you're watch multiple episodes in one sitting. The Pacific remains focused on chronicling the lives of Marine Privates and NCO's with apparent realism and accuracy. The terrifying and horrible Pacific theatre in World War 2 and the extraordinary courage and bravery of the men who fought in it gives one pause to reflect on how incredibly fortunate we are to live in the time we do.

But that's all it does and I'm not sure that's enough, particularly given the latitude a 10-hour, $250M should have provided the filmmakers. The Pacific fails to offer much beyond the oft-repeated “war is hell” mantra at the heart of most contemporary films about war, a charge that might be inappropriate given the quite-likely-intentional decision to limit the scope of the series. Much like the other major war-themed films released to DVD this year, including the Oscar-winning Hurt Locker, The Pacific displays the same underlying structural flaws that undermine most films in the genre. We already know that war is hell. The problem with this mantra is that it is statement on which everyone already agrees despite what side of the political divide - dove or hawk – you sit on. By concentrating on the personal experiences of the hapless soldier protagonist while avoiding the broader context of war's sociopolitical causes, these works end up becoming something less meaningful, more action flick than war film. The genre has become increasingly depoliticized as filmmakers attempt to achieve some sort of false-impartiality. Quite frankly, neutrality is just about the last thing we need in films about war.

I'd like to suggest like that as films in this genre have become progressively more adept at accurately portraying the utter brutality of war from the soldier's perspective, that there's been a trade off in terms of sociopolitical, introspective and and insights into causality and culpability. The micro-analysis of the soldier's existence that is the focus of most modern war films has come at the expense of addressing macro issues surrounding conflict and the decision to wage war in the first place. Films about the “justness” of military action are few and far between. It should be said that The Pacific never promises anything beyond documenting the experiences of the individual marine, but to avoid even mentioning the questionable strategic value and incredible cost in terms of human life associated with engagements like the Battle of Peleliu (the 1st Marines lost 1749 of approximately 3000 men, for example) taking an island whose airstrip and geographic location was of little value for future operations, seems to smack of perpetuating the myths surrounding war, valour and heroism.

War films are typically organized thematically into one of three modalities – the pro-military film, the anti-war film and the home front film. Movies in first category tend to glorify military actions without questioning their motivations, while anti-war films typically focus on the immorality and cruelty of warfare. Home front movies typically concentrate on domestic events as dutiful wives and families await the return of the husband, or news of his death. Movies about soldiers struggling to reintegrate into society also fall into this category. At first glance, most of the recent examples in the genre would seem to fit into the anti-war modality, however, on closer scrutiny it becomes difficult to separate them from the first category. Deliberate or not, in the absence of any larger sociopolitical context, these films can serve to depoliticize the genre and let causality off the hook. War is invariably waged as an extension of a nation's international policy. The structural causes of the U.S. decision to invade Vietnam (capitalist imperialism) for example, is given little thought in films about the war, even the great ones (films like Apocalypse Now '78 and The Deer Hunter '79). The recent wave of “War on Terror” films (The Hurt Locker '09, Brothers '09, Lions for Lambs '07 & Stop-Loss '08) also focus predominantly on the “war is hell” mantra and offer little more than representing warfare as a personal nightmare to be survived. Once again, the structural causality of the decision to wage war in the first place (oil) is avoided and the systemic flaws that gives rise to a foreign policy that deems preemptive military intervention to be acceptable extension of this policy are freed from charges of culpability.

The Pacific is decidedly not about the “War on Terror”, but its production during the ongoing U.S. engagements in Iraq and Afghanistan complicates matters. Neither the filmmakers nor the audience can avoid drawing parallels to their contemporary equivalents. Whether we care to admit it or not, the influence of present-day events bleeds into both the creation and consumption of cinematic representations of the past. The Pacific succeeds in representing the wide-eyed innocence of mid-century America and how soldiers were motivated to acts of extreme brutality and horrific cruelty to simply survive to live another day. Six decades later, one could argue that demonizing other cultures in support of military motivation to wage war at ground level hasn't changed substantially. Our collective awareness of the “war is hell” mantra, reinforced by dozens of films and series produced about different wars and military engagements over the last 30 years, hasn't seemingly translated into a desire to avoid waging it, and that begs the question: Why are we still doing them the same way each time?

As you can see, what started as a quick review of The Pacific quickly morphed into a larger piece, one that I intend to return to with a followup post on a recent film that was universally dismissed on its initial release, but one that I think speaks far more effectively to the larger sociopolitical issues that films in this genre tend to avoid.