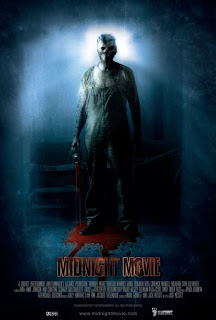 Not to be confused with the stellar doc Midnight Movies, this piece of shit kicked me in the balls and then stole my lunch money. Poorly aping details of several well-worn horror classics such as the fantastic Demons and The Texas Chain Saw Massacre, Midnight Movie cannot be forgiven for its ineptitudes. Production values are pretty good (aside from some dodgy special f/x), but nonsensical scenes that fit nowhere within the story, school play calibre acting, and plot holes wider than the one between your mom's legs all add up to a mess of a movie that stinks worse than downtown Toronto during the garbage strike. I would give the filmmakers credit for trying, if that's indeed what they had done.

Picasso famously noted (don't worry - this isn't about to become a Captain post) "Good artists borrow. Great artists steal." Well, these "artists" merely managed to botch the heist and as an end result get blown away (but not blown) by the bank manager. Too bad, really, I wanted to love this one. For horrors in a movie theatre, check the aforementioned Demons; for low budget drinking game fun, check Jack Brooks: Monster Slayer. I can almost see MM becoming a cult classic in about 20 years, one of those "so bad it's good" flicks that draw me like a moth to a flame. Almost. Unfortunately, Midnight Movie is only "so bad it's worse", and should be tossed onto the growing, uncollected pile of refuse outside your home. If you do decide to watch it, make sure it is at (or after) midnight, by which time you'll have already had your fill of whatever substance you choose to abuse, or that your level of exhaustion from scooping cones for 500 kids that can't decide if they want Blue Carnies or Birthday Cake has taken its toll, and you can overlook the movie's shortcomings.

Being a horror junkie is tough going these days - yes, there are many great unearthed gems being released to DVD for the first time ever, but there is also a seemingly endless tide of direct to DVD crap that masquerades as horror but only succeeds in disappointing and frustrating the genre fan. But the reason they succeed is that we keep coming back for more, in hopes of finding the newest jewel. Very similar to being a Blue Jays fan. Like an alcoholic with a vision of clarity, or a new parent, I keep asking, "why do I do this to myself?" The question goes unanswered as I become distracted...Night of the Creeps is coming out on DVD in October!!!!!!
Posted by the coelacanth at 8:51 PM

I honestly can't tell the shite DTV ones from the supposed masterpieces.