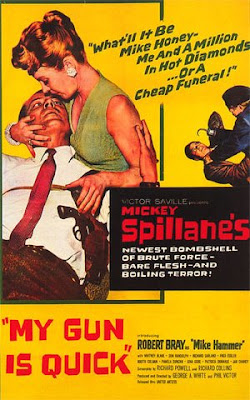 A double Mike Hammer bill today starting with a Black Vault copy of My Gun is Quick (1957) starring Robert Bray. Released 2 years after Kiss Me Deadly (perhaps the quintessential version of Mickey Spillane's Hammer character), the el cheapo My Gun is Quick has some charms of it's own, not the least of which is some terrific L.A. location shooting. Bray may not hold a candle to Ralph Meeker's portrayal in the earlier film, but he captures the dogged determination, toughness and basic haggard goodness of Mike Hammer pretty well. Spillane's stories are brash, intricate and detailed and they do a fairly good job telling one here. This is a very low budget and virtually unknown film but it's worthy of a look if only to see a nearly forgotten adaptation of a very famous character. 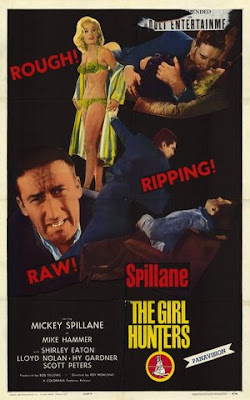 The second Hammer film we watched – rewatched in this case, I've seen it a couple of times before – was The Girl Hunters (1962). This is a bit of a personal favourite, a tough as nails and rather nasty adaptation of Spillane's novel on the same name with the added weirdness of having Spillane himself act in the lead role. I can't think of another example of this happening. The writer of the novel playing his lead character? Some have argued the Spillane was a pretty lousy writer but he was definitely a worse actor. Oddly, his portrayal works in its own weird way. After a particularly nasty fight toward the end of the picture, Hammer actually nails the unconscious loser's hand to a barn floor with a giant spike to keep him there.
Mike Hammer was a bit of a return to the “shoot first, and shoot second” school of antiheroes that were a little passe by the time Spillane wrote his first Hammer novel. Suave and sophisticated private dicks in the Phillip Marlowe mold had taken hold but that didn't stop Hammer from becoming an overnight success. The closest thing to a decent adaptation is Robert Aldrich's Kiss Me Deadly, a film everyone must see at some point. These two pale by comparison but I still enjoyed the hell out of them.
Sporgey
Posted by La Sporgenza at 12:23 AM

these both sound intriguing, especially "the girl hunters", but i REALLY need to watch kiss me deadly, which i've never seen. the horror, the horror...if it's in at the shop, i've resolved to watch it tonight. i'm not very familiar with the mike hammer character (really only familiar with the name), so i think i'll start with the best and work backward...to maiku hama.