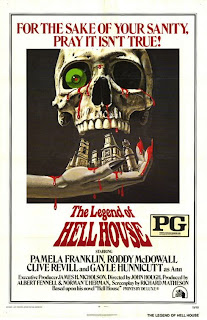 Richard Matheson's countless film and TV writing credits are often overshadowed by his most famous work, I Am Legend, from which three (to date) official adaptations have been made, with many other "last man on earth" films drawing direct inspiration from his original novel.  But attention must be paid to the fantastic work he has contributed elsewhere in the cinematic realm, the absolute peak of which, for me, is 1973's The Legend of Hell House.

Directed by John Hough (who would later go on to direct Dirty Mary Crazy Larry, the "Witch Mountain" films, and the supremely creepy "children's" movie, The Watcher in the Woods), The Legend of Hell House begins with a group of four characters - mental medium Florence Tanner (Pamela Franklin), physicist Lionel Barrett (Clive Revill), his wife Ann (Gayle Hunnicutt), and physical medium Benjamin Fischer (Roddy McDowall) - converging on The Belasco House, aka Hell House, the "Mount Everest of haunted houses" we are informed by Lionel.  They have been charged by the wealthy Mr. Deutsch with shutting the door once and for all on the haunting.  Trouble is, this very same thing had been attempted before, 20 years earlier, and all involved were either killed or crippled and made insane.  All but one, that is, McDowall's Benjamin Fischer, returning to the home not for any sense of closure, but simply to shut himself off from any psychic phenomena to which he may be susceptible, wait out the week, collect a paycheck, and bid goodbye to the house forever.  The young Miss Tanner and Dr. Barrett have other plans though - Tanner wishes to commune with the spirits in the home through her psychic powers, and Barrett wishes to zap the home of its energies with his newfangled technology.  Neither of them see their goals through to the end. 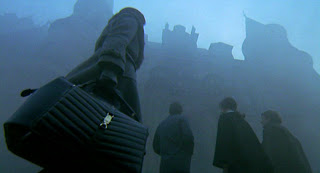 The film plays out in a tastefully restrained fashion a la The Haunting, and some opulent, creaky, cobwebby  sets inside the home (as well as the home itself) provide much appreciated eye candy.  Director Hough conjures a slow burn build to a simultaneously preposterous and chilling finale.  Along the way there are ghostly whispered threats and pleas, a possessed cat, a ghost-rape/possession, an eerie seance, overtones of sexual repression/buried desire, and an uncovered rotting corpse. As the days go by, the screws are tightened, and minds begin to break.  Bizarre and often grotesque camera work from Alan Hume (who lensed From Beyond the Grave, among many others) is filled with exaggerated angles, jarring depths of field, and tight compositions, and augments the claustrophobic, disorienting atmosphere of uncertainty and dread. 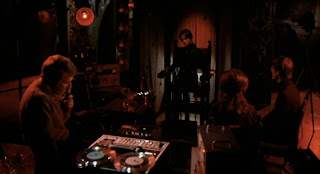 Executive produced by James H. Nicholson (of American International), The Legend of Hell House has a similar feeling to the films that came out of AIP's stable; brooding, gothic, ghostly, horrific more in their implication than what they actually showed, and with a wonderfully downbeat ending.  You could do far worse than to pop in this classic ghost house thriller on a rainy day like this.
Posted by the coelacanth at 4:39 PM

Labels: it's beginning to look a lot like halloween 3, joe

Nope, never seen this one. Do we carry it at either store Joe? Sounds CREEPY!

BTW...not sure you are allowed to say,

"all involved were either killed or crippled and made insane"

"all involved were either vanquished or became differently-abled and selectively perceptive."

"Snuffed out or turned into gimpy whackjobs" is also definitely out.

Speaking PC awareness..What did you think of Penny Lame?

hahaha, yeah you're right re: pc terms. i laughed at the penny lame name game.

we DO have TLOHH at the FBW, but not out here. it's really worth a watch, great atmosphere, and mcdowall is superb.

most of my watches this month are gonna be from my own collection (some we have at least one of the shops, many we don't). i've got a rapidly growing pile of horror purchases from amazon (seriously) that has been amassing for the past couple of years, many of which i've never seen before and would like to get to this month. so bear with me if it's something you've never heard of/will never carry in the store. on the plus side, you might be turned on to some cool titles....and i won't have any overdue dvds!

And what's with all the Zidane spam btw?

amazon.ca! free shipping over $39! the zidane spam is so awesome. what's so bizarre about it is that the comments are semi-lucid and rational, just the clickable names lead you to the spam. it's not all "hi! i love your blog! click here for great deals on cialis!"

hahaha oh yes, house. probably the best thing about this is the video box. more of a comedy than a horror, although it does provide a few cheap, fun scares, and a strange storyline, and norm and bull! it's a fun enough frightener. and yes, i own it (and very, very regrettably, its godawful sequel).

sorry, i also meant to add, "if you want to borrow it, say the word."