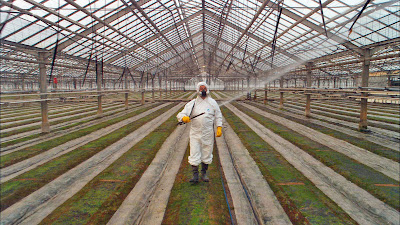 Our daily bread is an Austrian doc about the food production industry. Far from being the type of liberal preachy pot shot doc I thought it might be, this is a bit of a gem worth mentioning. It's totally elemental in terms of production, no narrator, no music and no real agenda. We are just an observer. Honestly, much like it was when I saw No country for old men, it is such a refreshing change to have no score insulting my intelligence and signposting the way to my own emotional responses. The film serves simply to reveal what happens to the food on our plate before it arrives. The cinematography is bold and uses symmetry to emphasise the scale of the factories, greenhouses and abatoirs along the way. All sound is purely ambient and I found my ears and eyes naturally drawn in, that's quite rare these days. Who would've thought that all you had to do to reinvent the wheel was dust off the cobwebs of convention. I wasn't really surprised by any of the shots of animal farming and slaughter, I'm fairly aware of this sort of thing and this had led me to not eat meat for the last 3 years. The things which really enlightened me were the scenes of basic farming, large scale harvest and pesticide spraying. My favourite scenes were two thirty second segments showing workers on lunch. Having just slaughtered 50 pigs that morning or having spent the last 4 hours seperating the kidneys from a cows severed digestinal tract, they just sit with their thoughts and enjoy their sandwich. This film doesn't exploit the shock and gore value of it's subjects or make questionable claims based on spurious evidence or doctored statistics. It just lets you see.
Posted by Britarded at 3:19 AM

this sounds excellent, as we discussed on monday. good review. we know all the stuff that happens to our food before production, but often it is forgotten as we shovel burritos into our mouths. it shouldn't be, and a objective reminder of such processes is always welcome.
and you're never quite the same once you've seen a meat slurry (since posting youtube links as comments or entire posts in and of themselves seems to have become de rigeur, i'll join in: http://www.youtube.com/watch?v=UhwXPsTaRgc )