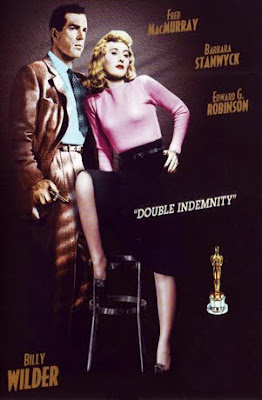 In order to save my job (and my dignity) I finally made time for this much praised noir classic. Some people say this is the definitive film noir and maybe that's true. I'd like to think that with film noir being such a hard to define genre for so many that maybe noir is relative to the viewer. While being a terrific film and a definite must see for anyone who is as silly as me and has yet to see it, it isn't the definitive genre piece. It's not the end all and be all of film noir, at least not to me. That tittle belongs somewhere between Blast of Silence and Le Doulos.

Still, the story is fantastic. Instead of the usual noir protagonists of killers, thieves, or hard boiled detectives the story here follows an insurance salesman. While making a house call about auto insurance he meets the wife of a wealthy older man. Before the salesman knows what hit him he falls in love with this woman. She convinces him to take out a life insurance policy on her husband and then kill him to collect. There is a double indemnity clause in the contract which means that if it's an accidental death the recipient of the insurance gets paid double what they are owed. Needless to say this is one well woven tale of deceit, murder, and greed. 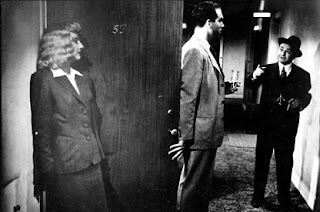 The plot is intricate yet not as hard to follow as say Kiss Me Deadly. Barbara Stanwyck has got to be the best femme fatale I've ever seen next to Rita Hayworth a la The Lady from Shanghai. Stanwyck whose looks at first i found odd had me drooling by the end of the film. The cast is adequate but Edward G. Robinson stands out as the street smart, fast talking, always without matches, insurance man Barton Keyes. Fred MacMurray plays the headstrong insurance salesman Walter Neff who is our protagonist. Billy Wilder and Raymond Chandler write MacMurray gold, but he lacks the bravado of many other great performances of the genre. He does have a terrific voice but his range seems a little stunted. Glenn Ford in The Big Heat gives us a strong male lead with depth, Allen Baron in Blast of Silence portrays a stone cold killer who is deeply flawed and emotionally unbalanced, and even Ralph Meeker in Kiss Me Deadly gives us a protagonist that's hard willed yet full of charm. MacMurry here lacks charm or depth and his flaws don't go beyond what the script tells us. He doesn't convey his inner turmoil as much as I would have liked. Although he picks up the slack in the most emotionally tense scenes.

If you say you're a fan of film noir and have yet to see this one well stop telling lies and get to it. A terrific film not just by film noir standards. 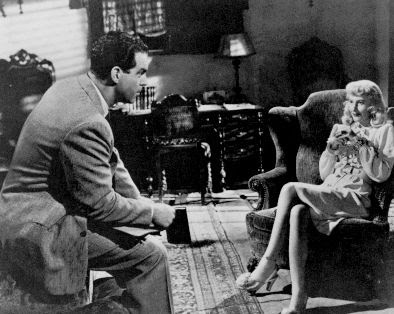 "How could I have known that murder could sometimes smell like honeysuckle?"
Posted by Dropkick at 11:46 AM

never heard of it.

Good read Kris... Sometimes films that grow in stature leave you wanting when you finally get around to seeing them – expectations being higher than the picture could possibly live up to. Kane was that way for me. Double Indemnity was one of the few A-production, big-budget film noirs and as a result it strays from the pure grittiness and low budget veneer that the others you cite pulled off in spades. That said, it's still a dynamite flick and has one of the best downbeat endings any A-list film ever got away with.

Oh, and one more thing - I agree completely that Fred MacMurray is a bit of a weak link here. He's a bit too young to play Neff convincingly. Ten years later in a much smaller flick called "Pushover", MacMurray nails it. World-weary, a touch jaded, a bit older and a lot less polished, I kinda wished he could have brought some of that to his Double Indemnity role. Pushover showed up on the last Columbia Noir boxset and is definitely worth a look.......... if you want to keep working at the Film Buff that is.

I definitely agree with you Sporg, I entered the genre watching some of the more grittier films. Films that were pushing the genre. When i have sat down with more of the A-list films they do lack the bite of say a Melville.

The ending was fantastic and certainly caught me off guard. The last lines between MacMurray and Robinson are cinema gold.

Will definitely be looking into Pushover and the other one you mentioned i think it was Nightfall... or City of Fear, i forget.
Yes i'll be getting to those as soon as I finally watch Touch of Evil