It's beginning to look a lot like Hallowe'en...part 3: Nightmare Detective (2006); or, When Did Freddy Krueger Stop Wearing Striped Sweaters?

Shinya Tsukamoto's (Tetsuo) latest entry into the weird, surreal universe of J-horror is merely an OK one. It borrows from all across the genre - most heavily from A Nightmare on Elm Street (the original - still terrifying, dark, and so sorely underrated), but also from Ringu, One Missed Call, Silent Hill, Suicide Club, and even his own work (particularly A Snake of June); hell, there are even elements of Romeo and Juliet in there - but never steals. While the film does contain some original, frightening imagery, and a couple of cool ideas, overall it comes across as an empty pastiche, detached from its precursors, and ultimately, its genre. There were a couple of playful jabs (that I quite enjoyed) at the whole long-haired female ghost thing that's been done to death in J-horror, but overall, the film left me cold. Too bad, as Tsukamoto has been one of THE directors to watch in Japanese genre cinema for awhile now. I'm hoping that this is a rare miss, and that his next effort (ironically, Nightmare Detective 2) restores the faith. Nightmare Detective is worth a watch, but doesn't bear lengthy dream analysis. 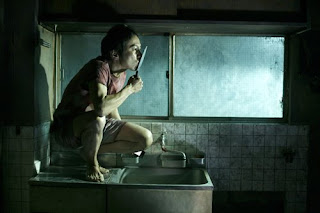 Labels: it's beginning to look a lot like halloween, joe