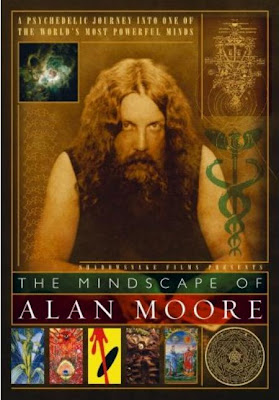 The mindscape… bills itself as "A psychedelic journey into one of the worlds most powerful minds". I was hoping for kaleidoscopes and Lou Reeds old band but what we have begins at least in a much more grounded manner.

For those of us that weren't aware of Alan Moore (including I must admit myself until very recently), he's been a prolific writer of comics since the late 80's and his comic to movie adaptations include The League of extraordinary gentlemen, From hell, V for Vendetta and the much hyped forthcoming Watchmen movie. A mixed list at best but finally with Zack Snyder (Dawn of the dead, 300) at the helm my hopes are high for Watchmen (The trailers alone are trouser tent inducing). This film isn't about the movies though; it's about the man. The big hairy hermit-man from Northampton. 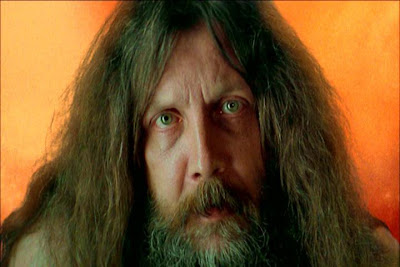 The initial appearance of now legendary Mr. Moore is fairly earth shattering. Moore is old, unkempt and has a broad midlands accent akin to that of a bus driver from Warrington. I don't know what I was expecting but it's all about as glamorous and shrouded in mystery as Britney Spears getting out of a low slung Ferrari. Once the initial fascination has subsided you understand how this film will work. Moore can really talk. Obviously he's a storyteller and as a speaker he's no Stephen Fry, he's more like someone you might meet after 6 pints in a country pub and wonder why the hell this guy isn't famous. Except he is. This is the dog from Fraggle rock, sprocket. 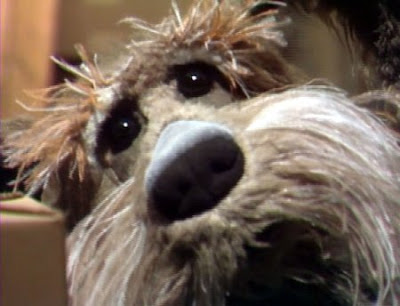 As a captivating speaker Moore fills us in on his childhood, he's funny too and self-deprecating to a point. It's a story of academic failure and a teenage misfit seeking an escape. He documents his knock-backs and personal limitations and it's quite engaging to begin with. A particular point of interest is when Moore talks about making comics that exploited specifically the limitations of film. Making his comics much more than "just movies that don't move". It's this kind of insight that give this film its value.

Eventually, Moore's eccentricities start to show through and his credibility crumbles a little. It becomes an awkward struggle of mixed feelings as you try to decide whether this guy is a visionary or whether he should just get out more. By the time Moore is declaring himself a wizard and describing how society is turning into steam you have the giggles and have found yourself in 'for fans only' territory. By now I consider myself fan enough to watch on. He is truly mental and quite lovable.

A few interesting concepts are touched on and Moore muses on theories of time and human consciousness and perception. I really just left this film feeling like I'd had a meandering and wavering conversation with the man himself. As said before it would be after 6 pints at least because I don't recall much of what was said but it was an interesting time nonetheless. I guess to call it a psychedelic journey into the mindscape of Alan Moore is quite accurate, though I recall at some point they compared his brain power to Stephen Hawking. No.

For nerds and geeks it's well worth a watch and should be accompanied by several copies of New Scientist magazine and a youtube search for 'transhumanism'. In hindsight one of the best things about this movie is all of the ways in which they could have so easily messed it up and didn't. Enjoy this unique nugget. There I said it. Nugget.
Tom.

Posted by Britarded at 3:33 AM

hahaha this is a great review, mot. i laughed many times. you are a funny motherfucker and i love you. i wanna drink 6 pints and watch this.