SNUFF goes off-roading today with 3 stupendously different films starting with Edward Yang's 3-hour Taiwanese family drama, Yi-Yi (2000), followed immediately by The Pang Bros' Bangkok Dangerous (2008), and finally a revisit of A Bridge Too Far (1977) starring everyone, except Paul Newman, who stayed home to be on Carson and Steve McQueen, who died in the parachute drop. Nicholas Cage stars in all three films 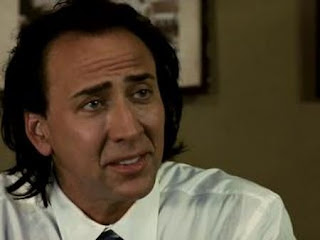 … a one and a two..... Yi-Yi is dull as dishwater, but I spent most of the time reading the Sunday New York Times while it was on and didn't really pay it much mind. I think there's a good movie in there, perhaps even a great one, but it needed to be edited at least in half. As it stands, it's too long by at least the front and Week In Review sections of the Times. I watched the final hour fairly closely, except while I was in the shower, and enjoyed what I saw of it. Cage (see right) is riveting as Yang-Yang, a little Taiwanese child. The cat wisely slept through the whole thing. Taiwan looks like a cool place. 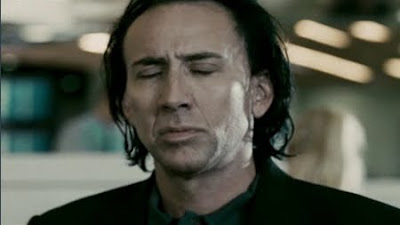 Back to Thailand this afternoon to view the much-maligned Bangkok Dangerous, a title that seems more like a warning than a movie. Loved it. Nicholas Cage once again owns this movie. It's a completely kooky film made immeasurably better by the jet-black WWE hairdo Cage sports throughout. I particularly liked the opening sequence where the Czech-that-out secret police position their important prisoner right in front of a big window, paint a bullseye on his forehead and then light up the room like the fourth of July. Cage, of course, wastes 'im... blind-sniper-assassin-style! (see left). It's immediately followed by Cage tazering his junkie Czech-mate to death and then dosing him with about a litre of herion to wipe clean any trace of his presence in Prog. Nary a Pang of guilt from the Thai brotherhood in the script department. I've already forgotten what happens after that. Bangkok looks like a cool place too. 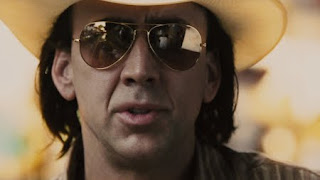 Tonight's sold-out screening of A Bridge Too Far (Canfield, the cat and I) was a winner. This might be the last of the cast-of-thousands mega-pics of the '70s, but what a cast it is. Dirk Bogarde, James Caan, Michael Caine, Sean Connery, Edward Fox, Elliott Gould, Gene Hackman, Nicholas Cage, Anthony Hopkins, Hardy Krüger, Laurence Olivier, Ryan O'Neal, Robert Redford, Maximilian Schell, Liv Ullmann, Denholm Elliott, and Colin Farrell, although not that Colin Farrell. This is a big-ass war film by director Richard Attenborough that has the entire citizenry of Beverly Hills attacking Nazis in Holland and failing miserably... just as you'd expect. Holland looks like a nice place at the start.... a little less so by the end. Interestingly, A Bridge Too Far is 1 minute shorter than Yi-Yi for some reason, even though way more happens. Cage puts a highly unusual spin on his portrayal of Dwight D. Eisenhower, playing him as a gay cowboy, but it works. (see right)

So, Sean said "yes" when you invited him round for a snuff film session? I must rewatch A bridge too far, I saw it about a month ago but I really don't remember the bits you mentioned here. True, that haircut is reminiscent of Bret The Hitman circa '93. Nuyce.

Oh and apparently you already reviewed it

Joe's effed up, and while yr at it Kilocanth, add Limits of Control to the sidebar, scotts pickles may have distracted you, but there was a comment on the film in there somewhere.

Props for the Nic Cage introspective. The king of the modern B Movie. The King in more ways than one. And whats up with A-list hollywood leading men sporting low-hairline, curiously dyed, longish dead hair? See: Tom Hanks when he is balling Dan Brown and of course, our man Nic. Query: Is this my next haircut? Or next high-concept, costume date?