A year in Jules. 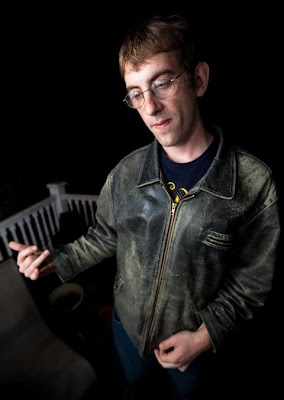 Working with Jules this year at The Film Buff East has been an experience and a privilege. At some point i decided that the things he said could not be kept a secret and I started writing it all down. Here is a quick recap of some of my favourite moments from this year for those of you less fortunate than myself. - Tom

"Dude, if you were as intense as me when you worked you'd make a mess too...
in fact, that would be a cool thing to say at a job interview. What do I do? Me? I'm intense" - Jules

‎"I'm not from England so I have no idea what 'Midsomer night's murders' is." - Jules

‎"The thing about the Iron Man movies is that guy was so well cast, yeah, Cuban Downing Jr or whatever, he was perfect" - Jules

"That movie Red Riding:1974, yeah, they shot that on sixteen millilitre" - Jules

Joe - "Ya know, Tom might be getting deported in a few weeks"
Jules - "Dude, I get all his shifts okay?"

Saw Jules tonight looking up "Specific Kites" on the computer at the video store, turns out there was a customer looking for "Pacific Heights", Jules was "helping" her find it.

"Actually, my Auntie and Uncle live in the coastal mountains in Oregon, yeah, they keep a cows, sheep and a whole bunch of pork" - Jules

Jules - "Ah, rocket candies for Halloween? I suggested that last year and everyone laughed. Dude, all my life I've had people ridicule my ideas only to rip them off later"
Me - "Like what?"
Jules - "Those bonus keys higher up the neck in guitar hero........and now giving out those rocket candies at Halloween"

"...just because she had a slightly darker complexity and slanty eyes" - Jules

"Chicks man seriously, you don't know how many times they've said to me 'I wish I had those lips', seriously you don't even know" - Jules

Jules - (excited) "I'm going to Montreal tomorrow!!!)
Me - "Hang on, yesterday you said 'Shit I've got to go to Montreal'"
Jules - "Well, I've started to feel differently about it"

‎"Don't you just wanna watch this movie? It says 'five women, one weekend, too many lies' ooh sizzling. Five hours of women being passive aggressive to each other" - Jules

Jules - *pointing at the computer* "Check out these before and after photos of Corey Haim"
Me - "Oh yeah, I worked with him a couple of years ago"
Jules - "Before or after he died? No wait"

Customer - "Do you have the series Sherlock on dvd?"
Jules - "Sherlocks?"
Customer - "Errrr... yeah"
Jules - "It's actually just called Sherlock"
Posted by Britarded at 5:35 PM